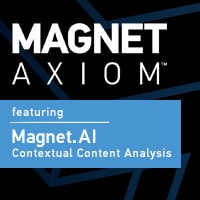 Child exploitation investigations often involve luring (also known as grooming): the process by which a child predator gains their victim’s trust. Because this happens a lot over chat apps (and chat features within, for example, gaming apps), you might find yourself reviewing thousands or even millions of messages to find your evidence. When you need to find relevant evidence quickly to move an investigation forward, you don’t necessarily have the time it takes to evaluate these messages individually.

Found within Magnet AXIOM 1.1, Magnet.AI uses machine learning to narrow massive amounts of content. In its initial offering, Magnet.AI focuses on chat. Its function is to suggest chat conversations that should be examined for child luring.

How Magnet.AI’s contextual content analysis differs from other analytics

Within the generally accepted range of digital forensics or even other “predictive policing” tools, “analytics” usually refers to the tool’s ability to pinpoint data based on a date and/or time range, a set of keywords, a location grouping, or some other structured, discrete piece of data.

However, language is frequently unstructured, with nuances such as slang that keywords can confuse or miss. Such keywords can narrow an investigator’s area of focus, of course, but they lack the context to tell when a message falls into one of two categories: “is” or “is not.” You might not be able to determine intent, for example, between a “let’s meet” designed to lure a child to a motel room, versus a “let’s meet” directed at a fellow business owner.

Distinguishing between the two types of messages may take more time and effort than you have, especially if you’re faced with multiple devices and limited time to identify, interview, and arrest (or not arrest) your suspect. You need a way to triage each device, not just for contraband images, but also for the conversations that might mean the suspect is actively hunting children.

Machine learning, via Magnet.AI, offers that context by providing a predictive apparatus “trained” to recognize messages that fall into these categories, and then to classify them accordingly as “possible luring.” This ability gives you a place to start, both for finding evidence and for using it during interviews and arrest proceedings.

In this way, Magnet.AI goes above and beyond other analytic applications, such as named entity recognition, by contextualizing entire conversations. The result is the ability to look at chat threads as a whole, instead of individual messages—to be able to differentiate between (for example) messages about caretaking or guardianship, versus messages about abuse.

This improves the triage process by helping forensic examiners to focus their efforts more accurately, saving time and reducing the risk of human error in missing messages.

A partnership between humans and technology

Don’t expect Magnet.AI to replace human investigators anytime soon. Even though a similar technology, OpenAI, has taught itself to classify positive from negative product reviews on Amazon, that is a very different application from identifying evidence to be potentially used in a criminal trial. Just as humans are needed to validate forensic evidence found by automated technology such as Magnet AXIOM, humans also need to validate Magnet.AI results.

Indeed, it’s the human rather than the technology that builds the totality of a case, relying on digital evidence to put other evidence into perspective (and vice versa), to understand the subtleties between what is and is not illicit. Getting to this point, however, requires a strong starting point; a way to move forward rather than to spin your investigative wheels. It’s in this space where Magnet.AI is designed to offer traction, during the early stages of an investigation where it’s needed most.

Magnet.AI: Just the start of machine learning for digital forensics

While Magnet.AI, as of AXIOM 1.1, will focus on child luring/grooming investigations, its potential applications aren’t limited to child exploitation cases. Going forward, investigators of gang and organized crime syndicates, narcotics manufacture and sales, and even those in smaller-scale crimes like homicides, assault, and property offenses, could ultimately use classification technology like Magnet.AI to spot and classify common language—terminology, shorthand, and codes—across people involved in criminal enterprise.

Best of all, Magnet.AI is included as part of Magnet AXIOM 1.1. No separate license or program is required to utilize this feature, which automatically runs as part of AXIOM Examine once chat content has been parsed. We believe that forensics examiners should be able to access all the powerful tools they need in a single interface and for a single price.

Saving lives and catching criminals is all in the timing, and our team will continue to build upon and refine the algorithms that Magnet.AI is based on. When thousands or even millions of hits are possible, making use of the lessons learned in the “big data” industry helps to separate wheat from chaff—helping forensic examiners complete their work much sooner than they could otherwise.

We’re proud to offer a new free tool to your toolkit for use within Magnet AXIOM, the MAGNET Hash Sets Manager.