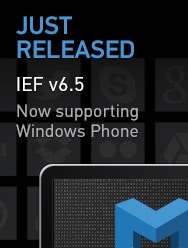 IEF is already capable of recovering evidence from native and third-party mobile applications found on Android and iOS smartphones. With the release of IEF v6.5, investigators can now use IEF to analyze a physical image of a Windows Phone acquired using JTAG and chip-off techniques.

Tinder has emerged as popular location-based mobile dating application used by millions of people to meet other singles. In this release, support for this location-based dating app has been added to IEF, as finding evidence from this new class of application is becoming increasingly useful.

As various Android device manufacturers move to F2FS file systems, support for the recovery of artifacts on Android phones running this new file system has been introduced.

IEF can also recover a host of new artifact types, and has updated its support for many others:

Now available as an optional module, Triage capabilities can be added-on to any license, giving an examiner the flexibility to bring their dongle into the field to conduct live system forensics. Capture live RAM, collect data from live system artifacts, and run an IEF search to recover hundreds of different types of digital forensics artifacts from Windows powered computers.

Several additions have also been made to IEF’s analysis and reporting features:

As part of the release of IEF v6.5, Magnet Forensics has re-introduced IEF Triage as an optional, add-on module, enabling forensic examiners to run an IEF search on a live system in the field. This change is intended to provide customers with greater flexibility to customize their IEF license(s) to meet their investigative needs and budget. The table below summarizes the current IEF licensing and pricing options: